This fall-favorite may be your greatest superpower 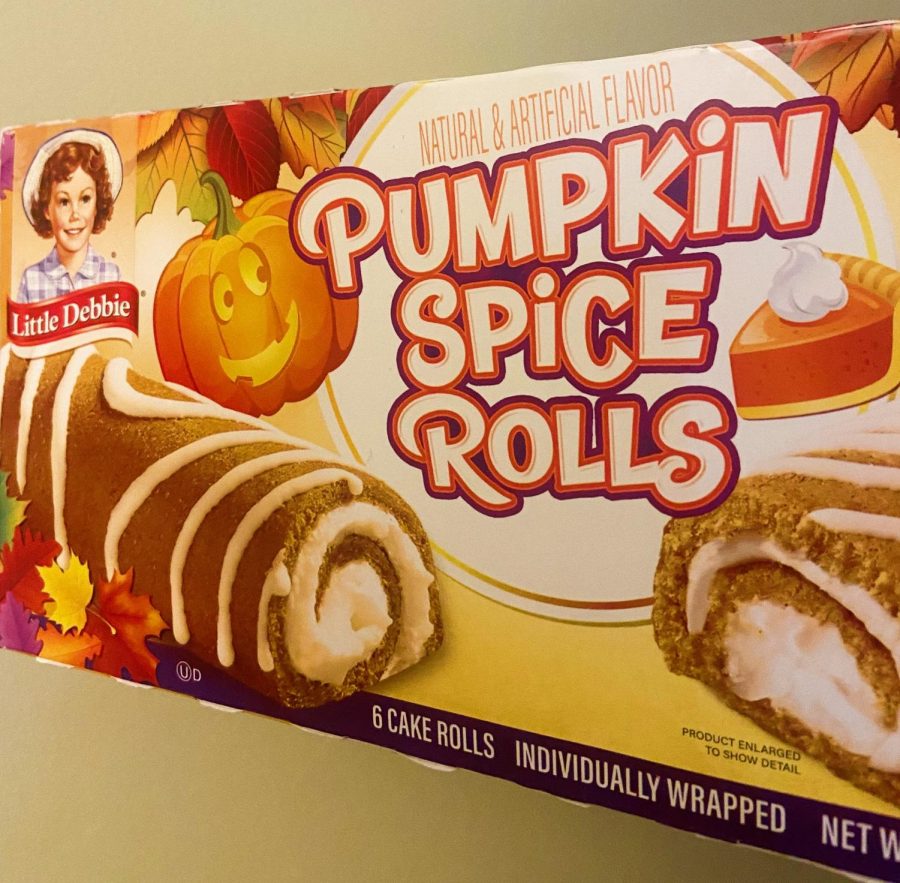 Little Debbie pastries are catching onto the pumpkin spice “wave”.

With the falling leaves being a bold orange hue, pumpkin spice makes its seasonal arrival to people’s lives. During the autumn, this blend consumes the shelves of grocery stores and the menus of coffee shops. Pumpkin spice is shown to do much more than satisfy one’s festive needs, as it has many health benefits. As connoisseurs of all things autumn rush to get their fix of pumpkin spice, they may also be receiving a fiber and immunity boost, stress relief, and increase in serotonin levels.

Pumpkin spice lattes appear to lack nutritional value with the amount of sugar hidden within its labels. However, the pumpkin spice topping is packed with health benefits that many individuals would not expect. This spice is often made of a mixture of cinnamon, nutmeg, clove, allspice, and ginger. Not only may a pumpkin spice flavored treat increase your serotonin levels, this spice itself can benefit your physical and mental well-being.

Students of Westerville North have shown a trend of being in favor of lattes including this blend.

Sophomore Amanda Cooper, a fan of pumpkin spice and a food connoisseur, commented on the craze.

“I use a little [pumpkin spice] in my breakfast, in my chai tea lattes,” Cooper said.

“I can’t live without my pumpkin spice chapstick,” Link said.

Link cannot resist the fall season or the fun pumpkin spice treats that come alongside it.

The spices’ medicinal properties seem to be hidden across the shelves of stores, not just on produce isles. Pumpkin spice has made its way to self-care products, and Link is all about it.

“Pumpkin spice tends to help a lot with my mental health, it makes me feel less stressed and I feel more relaxed when I have it,” Godorhazy said.

The ginger and nutmeg within this spice has a lot to do with de-stressing. Ginger contains a vast amount of zinc. Zinc is capable of increasing gamma-Aminobytric acid levels, which is directly related to decreasing anxiety symptoms.

Another trend was apparent in the effect of pumpkin spice on the mental health of students.

“It [pumpkin spice] makes me happy, and it’s a serotonin boost,” Cooper said.

Nutmeg has shown a correlation to balancing mood hormones and increasing serotonin levels in people. Nutmeg contains a wide range of B vitamins that are responsible for producing neurotransmitters, like serotonin.

Health teacher and football coach, Joseph Clegg, has a strong opinion on this issue.

“These items usually contain a lot of sugar, which would far outweigh any health benefits given by pumpkin spice,” Clegg said.

Becky Fowler, an independent personal wellness coach, operates two healthy cafes with the help of her husband and team. These cafes are known as Rev Nutrition at Hoover and Uptown Rev Nutrition, located in Westerville. Fowler gives her take on the benefits of pumpkin spice when mixed in various treats.

“If it’s mixed in a muffin or bread, like you get in many restaurants, the result is often the sugar and fat, defeating many of the health benefits of consuming the pumpkin spice,” Fowler said.

Godorhazy had a similar response.

“I feel as though tea and granola bars are best for health benefits. They make me feel the most energized,” Godorhazy said.

Being conscious of the form of pumpkin spice consumed is valuable, but it’s not everything. There are better ways to consume this spice that can increase the intensity of the medicinal properties it offers. However, a sugary, festive fall treat never hurt anyone.

The fall brings so many delights, pumpkin spice being one of them. There are so many ways to enjoy the ‘spice of life”. Whether it’s a pumpkin spice latte or a pumpkin spice soup, a little spice goes a long way. Cinnamon, nutmeg, clove, ginger, and allspice truly pack the healthy punch.