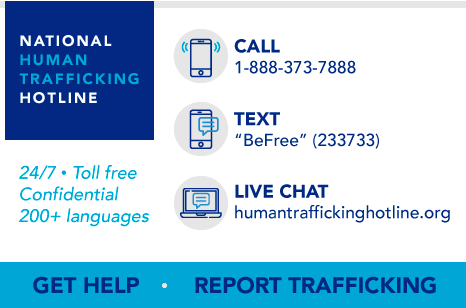 Human trafficking is an issue happening in modern times, impacting families and individuals all around the world.

The international labor organization (a United Nations agency whose mandate is to advance social and economic justice) estimates that there were 40.3 million victims of human trafficking in the world in 2016. In 2016 and 2017, Ohio reported the fourth-highest number of human trafficking cases to the National Human Trafficking Hotline.

Although Ohio is known for having high reports on human trafficking, this isn’t just happening in the States. Some of the highest rates in the world come from Russia and China.

Ruth Downing, a nurse practitioner in an urgent care setting, works with victims of human trafficking.

Human Trafficking is the 2nd largest and fastest-growing criminal industry in the world.

“Human trafficking is a huge moneymaker. One girl can bring a minimal of $200,000 a year tax-free for a trafficker,” Downing said.

Robin Mcneal works as a Teen Advocate for a domestic violence service provider, bringing awareness education in schools on teen dating violence. Although most of her human trafficking work is done through volunteer work.

Mcneal explains that anyone can become a victim of human trafficking and that our vulnerabilities can make us more at risk.

“Online is where many victims first connect with their trafficker, and after a period of grooming (the process a trafficker uses of identifying a victim and then systematically gaining control over them), the trafficker looks for vulnerability to take advantage of,” Mcneal said.

The more people know about and understand human trafficking, the more we can address the issue and educate others about it.

Westerville Central graduate, Anna Brown, was sexually assaulted this past year and recently shared her story on social media. She advises high school students to be aware when going out and to always stay with a friend.

Brown also explains that if you know someone who has been impacted to just simply acknowledge and believe in them.

“This can take a lifetime to heal from and it is most likely a very traumatic experience,” Brown said.

In the early days of the anti-trafficking movement, survivors struggled to show the public that this is a real and pressing issue. Today people just like Brown have stepped up and shared their stories which have helped bring awareness to this issue.

Every person can play a part in fighting human trafficking, and as a high schooler, there are many ways to help.