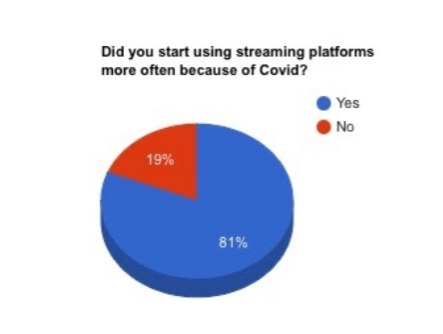 Covid-19 started in March 2020, and since then, it has influenced everyone’s lives in one way or another. Almost everyone stuck at home with nothing to do because everything was closed. This made nearly everyone guilty of starting to excessively watch TV out of boredom for hours on end.

Streaming companies such as Netflix, Disney+, Hulu, and more are experiencing an increase in sales like they’ve never seen before. For example, in Netflix’s income statements from December 2019 to December 2020, their operating income increased by nearly 2 million. Although, with the shut down and the increase of sales for streaming services, movie theaters are having more challenges.

Movie theaters are struggling in many ways because they are constantly being shut down. Most movie theaters have opened back up in America but with the rising cases, that reopening might not last very long.

The reopening of theaters in Europe with cases going through the roof didn’t last long either. Places like the U.K. and Italy have had to close more theaters because of the surge of Covid cases according to Variety.com.

Amanda Mosley, a business teacher at Westerville North, spoke on this topic from a business standpoint.

“From a business standpoint movie theaters are struggling with not only getting business but having to increase stock to build interest,” Mosley said.

“From a standpoint of capital and money, they’re not bringing any money in… The production companies are still making money by putting their movies on HBO Max so I don’t know how the theaters themselves are going to make it,” Mosley said.

Not only do the closings affect the money and business coming in, they had to make accommodations upon their opening to make the transition as safe and efficient as possible, but this also decreased available seating in the theaters.

Some of these accommodations include social distancing, mandating masks in the theaters and disinfecting each theater before the next movie starts. Although there are these extra precautions put in place it’s safety is still at question.

“In certain scenarios, yes it (movie theaters) are safe… These (streaming services) are safer options than potentially getting exposed to Covid while at a movie theater,” Westerville Central Senior, Grayson Harris said.

Streaming services on the other hand are having a ton of business and doing extremely well. These streaming companies may even run movie theaters out of business.

“Streaming companies and movie theaters are similar to the situation of door dash and restaurants because the were restaurants closing so the business for door dash increased exponentially but neither can provide the experience of going out and being at a movie theater or a restaurant,” Mosley said

Different streaming providers such as Netflix are coming out with new movies and getting lots of new users since Covid.

Lauren Hilderbrand, a Westerville North Junior, was one of the people to purchase Netflix since the start of quarantine in March.

“I think in some aspects, streaming platforms are better, they have a wider variety of movies whereas going to the movies you have a specific movie in mind,” Hilderbrand said.

When more places start to open because of the vaccine movie theaters may have a drastic comeback.

“Now that the vaccine is being given out, movie theaters could maybe open up soon and bring back the experience they always did,” Harris said.