Period products at Westerville North are here to stay 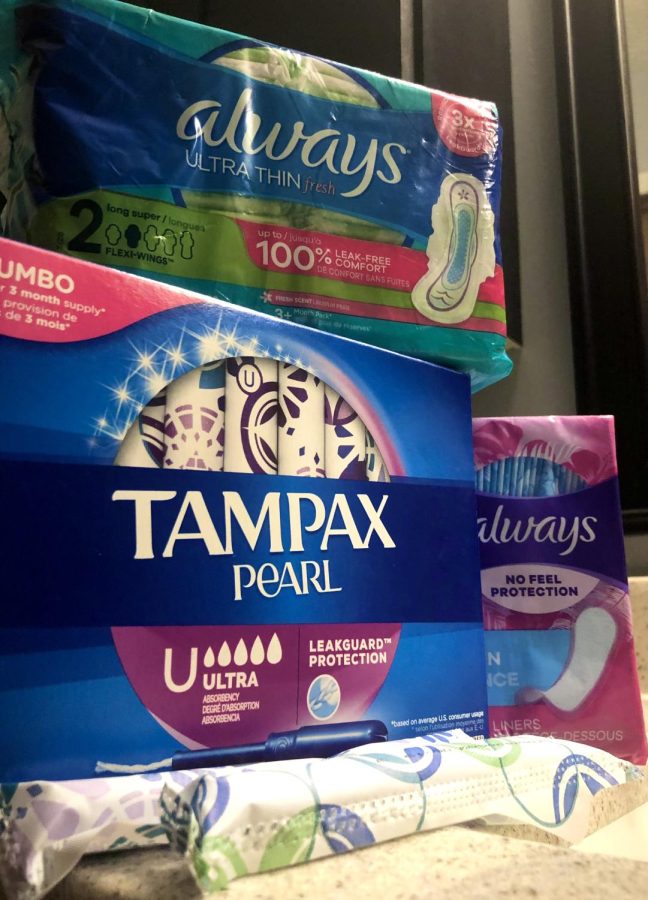 Shown above is a collection of period products often used by high school students. The products pictured would average around $30.

In any stressful situation, all anyone wants to feel is supported. High school is notoriously one of the most high-stress periods of anyone’s life, so when an inconvenience gets added to an already stressed student’s plate, such as their period, they need the proper resources to continue to balance the multitude of other responsibilities they are faced with. But when their school does not supply them with the proper resources necessary for their health, where do they go?

This isn’t a new controversy at Westerville North High School (WNHS). Multiple times throughout the years, both students and administration have tried to have period products become a district-funded resource accessible for students, but the effort repeatedly does not stick around. Whether it be due to the destruction of the tampon dispensers or the issue not being a top priority of those in power, the project has been put on hold for years.

However, with a new wave of inspired students with a plan, period products might have their long-awaited time to shine in the WNHS bathrooms. Amanda Cooper (11) and Colleen Lynch (11) have voiced their concern with the lack of resources they have available to them. With the help of teacher Leslie Baumann, Cooper and Lynch have a plan up their sleeves.

“Because I am involved in the school, I get to see more of what the administrators are doing, so I have more of a drive to change things because I have more of an idea of what exactly is wrong,” Lynch said. “Right now we are working on an application to present why we need pads and tampons in the bathrooms, how much it would cost, and how we would achieve it.”

The effort to restart what seemed to be a lost cause was inspired by others in the community making change.

Baumann, who has already been a part of this effort multiple times prior to its most recent attempt with earlier WNHS graduates, has faith that this time, period products are here to stay.

“I think the school was behind with their thinking. We didn’t really push it in the past, but now, the administrative people I’ve talked to, are on board. I think even in the past couple of years, public opinion has changed,” Baumann said.

The team involved in this project is doing everything they can to make period product dispensers a lasting resource for students, both current and future.

“Efforts like this in the past, where you are providing resources to students, have trickled out when the instigators graduate. It’s important to make things a continual effort; make it ‘the norm’ at North,” Lynch said.

“There is always red tape with everything. Everyone is just trying to figure out district policies and guidelines [on] how to make this happen,” Thompson said.

Even though there have been restrictions preventing the dispensers from being put in WNHS, the students hope that they will prevent period products from being removed from the school again.

“I feel like having a permanent installation would make it easier to continue the effort,” Lynch said.

Baumann emphasizes that having a resource that always has period products not in the bathrooms doesn’t make sense.

“People [should] equate them with toilet paper. Nobody would ever think you needed to bring your own toilet paper,” Baumann said.

While tampons and pads are supplied in some teachers’ classrooms, it’s not always a comfortable or convenient environment when in need of a period product.

“While some teachers provide [period products], it’s a lot to assume students would feel comfortable going up to the front of the classroom to grab these products. A lot of the time, people are already in the bathroom when they realize they got their period,” Cooper said.

“It’s something easy to become accessible. It should be provided by the school. It’s healthcare, it’s a standard,” Cooper said.

Overall, the project to get period products at Westerville North is one for both students and administration to look out for.

“Seeing the administration [put period products in the bathrooms] would make students proud to go to North. They’re showing that they care about their students,” Lynch said.