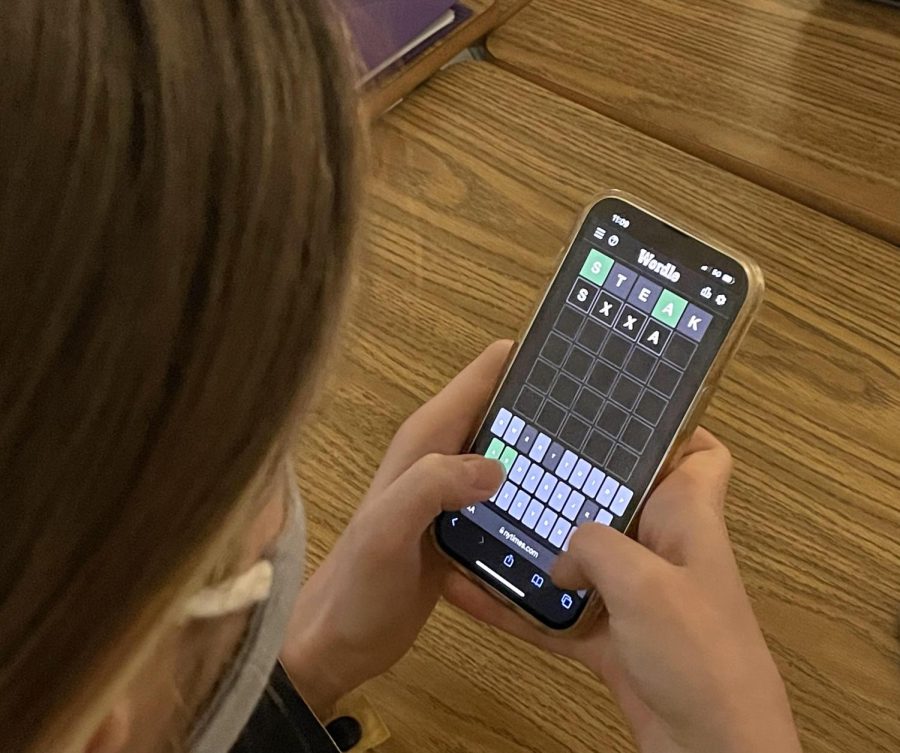 Emily Widman (12) plays Wordle in class. She's trying to figure out what the word of the day is.

In recent months, Wordle, the popular online word game, has taken the world by storm. Created by British software engineer, Josh Wardle, made the well-known game for his wife in October 2021, the game now has a recorded average of over 300,000 players each day. The game’s premise is simple, every day a new five-letter word is chosen and players have six tries to guess correctly. There are no hints, however, after each guess it shows which words were correct in placement or incorrect completely. Its popularity continues each day, and some of its many players include staff and students at Westerville North.

Staci Tomblin (12) describes herself as a fan of the game, only frustrated when stumped with a difficult word or losing her playing streak.

“I play because when everyone else is doing it, it’s fun and competitive. The only thing I don’t like about Wordle is not getting the word, which has only happened once,” Tomblin said.

Catherine Stathulis is a former English teacher at Westerville North.

“What’s fun about Wordle is that it’s limited – you can only play once a day. Also, the competitive nature of the game through social media creates some serious hype,” Stathulis said.

Although many students at Westerville North are part of the Wordle craze, others do not see the appeal, including Teresa Fernandez (9).

“There are too many 5 letter words that most people don’t even know and you can’t tell if there’s more than one letter. There’s also no hints; I would like it better if it gave the definition,” Fernandez said.

Additionally, it seems that the competitiveness of the game either draws people in or steers them away.

“I feel like it’s only popular among the academically competitive. All my friends in my honors and AP classes love it but my family doesn’t really care for it,” Tomblin said.

“I think people like it because it makes them feel accomplished and also they can feel better if they get it and others don’t,” Fernandez said.

If so many people think Wordle players are the competitive and intelligent type, are there any academic benefits to playing?

“I guess you could learn new words but the day after I always forget the word from the day before,” Tomblin said.

Stathulis agrees with the lack of vocabulary building, but says there may be another type of advantage.

As someone with a background in English, she has an appreciation for word games, although some may be geared more for entertainment rather than academics.

“I think it’s really a guessing game. I like the New York Times Spelling Bee or WordScapes as more challenging word games. But Wordle is fun,” Stathulis said.

Overall, for fans of Wordle, it is a fun game to play and get competitive with both friends and themselves, and its popularity shows no sign of stopping any time soon.